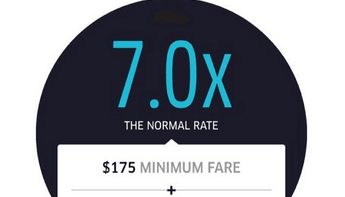 Uber , Ola, Taxi for sure and all other taxi Apps are truly disruptive to the taxi business and have made life easier for many people.

Now a taxi is just a touch away and you pretty much know how far away it is and when it will reach . Like scores of customers , I am sold on this idea and am a frequent user of almost all these apps.

So lets talk about what these Apps finally want to be. For the sake of this discussion let me talk about Uber . Uber’s tagline was/is Everyone’s Private Driver.

So what does Uber need to do to achieve this objective

Now I am not debating if it is right or wrong, it makes business sense to charge as high as you can especially since all these companies are simply burning cash ,but my point here is about “will it help Uber achieve its ultimate objective or being everyone’s personal driver”?

To demonstrate the point , let me bring in a personal example. I wanted to use uber to go till a bus stand instead of an auto , simply because it was too easy to get it. Uber suggested that since it was peak hour, I would be charged 1.2X times for a distance of 5 Kms. I still decided to use it though. The moment I reached the bus stand , just out of curiosity I rechecked the price and it was 5.0X times normal. This was in the span of 15 minutes and a distance of 5 Kms. If I had been quoted this rate, I would have definitely not taken uber . Looking  at such variation, my instant reaction was , I cannot always depend on Uber and possibly missed the 5.0X window by a few minutes. It is like a game.

Surge pricing is Ok if it is not too high. Eg: when you quote using the “Bata Pricing” of 1.XX times(say 1.98 X) , people still perceive it as 1 ish . It seems Ok and can be tolerated but when it crosses integers and is in the range of 2X 3X and even 5X , I get a feeling that I possibly cannot depend on it. Your own car or an auto running on meter (autos are legally not allowed surge pricing , except for night rates) would not surge prices.

Basically , I cannot depend on uber during the times I might need it the most and that exactly is the problem

This simply means that people will always keep a second option open, an alternate mode of transportation , thus defeating the whole purpose of Uber’s tagline . I have all the apps on my phone in addition to various numbers of local taxi players not signed up with uber.